Picture or it didn’t happen, right? The ChefSteps team snapped plenty of images during our invasion of New York City for the James Beard Awards last week. Were we nervous about the awards ceremony? Hell yeah, we were. Still, what were we going to do, let a few butterflies prevent us from making the most of one of the world’s greatest food-and-drink cities? Not this crew. There are so many options to choose from when you’re in NYC, it could take you forever to eat your way through the city, that is why it is important for restaurants, cafes, eateries, etc. to make sure they are being seen for everyone to enjoy! It may do them well if they looked at hiring a Hospitality Website Design team or something similar, so people like us can find some hidden gems in NYC that may not have been known about before.

So, from an epic dinner at Wylie Dufresne’s Alder to a morning-after-the-awards recovery session at the amazing Joe Pro Shop in Chelsea-and taking down no small quantity of cocktails in between-we made the most of our few days in the incredible city. And amazingly, we ended up winning in both award categories in which we were nominated, a major honor and an achievement that would have been impossible without you, our fantastic community.

Reva: I ate a salad here. It was the first of many beet-based food and drinks of the weekend-guess beets are trending in New York right now. 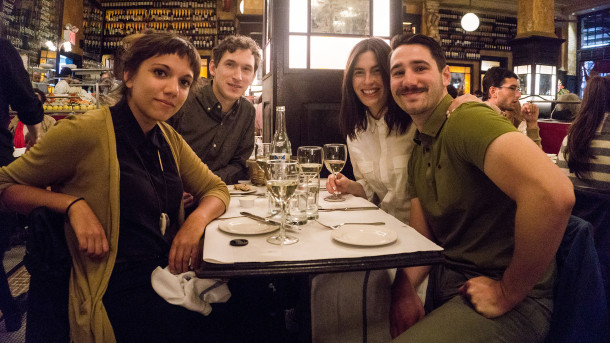 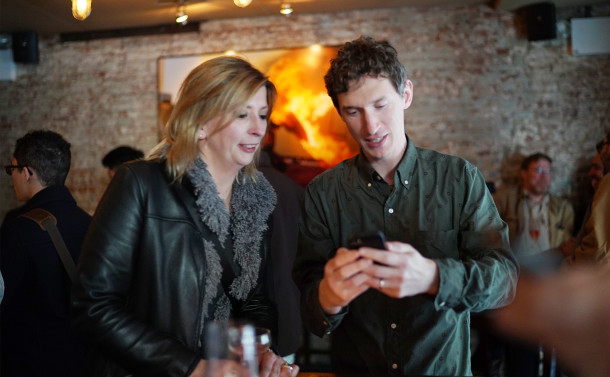 Chris: I’ve been friends with [Booker and Dax owner] Dave Arnold ever since he and I were the warm-up act for various Food Network stars at the South Beach Wine & Food Festival many years ago. Dave’s a genius-his incredible book, Liquid Intelligence, garnered a Beard this year-and Booker and Dax was really the perfect place to invite our community, since there’s a lot of overlap between its fans and ours. Above all, what made this great was how excited our community members are about what we’re doing at ChefSteps and it gave us an opportunity to talk with them in person. At the end of the day, even as a digital content and technology company, we’re still in the hospitality business. It’s great to hear we’re making people happy. 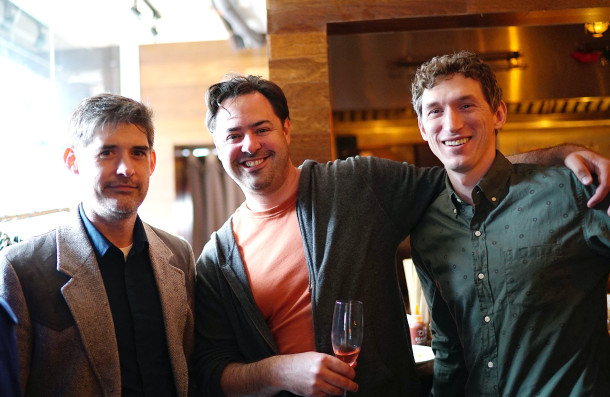 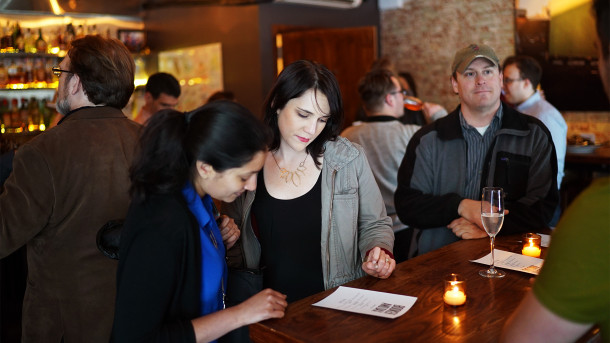 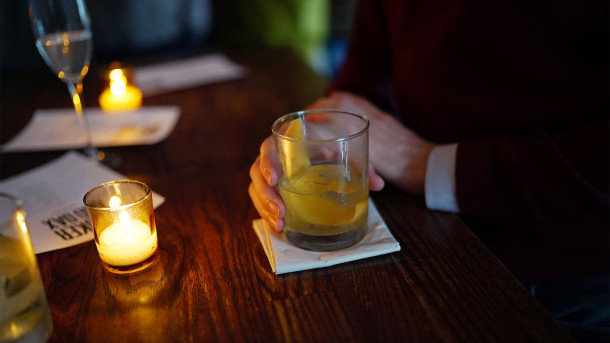 Reva: I was super-impressed to hear about the recipes from the site that our community members had made-ambitious things like Kouign-Amann and Wine Gums. Quite a few people mentioned liking the One Reuben to Rule Them All video, and wanted to know more about Camp. Mostly I took pictures. 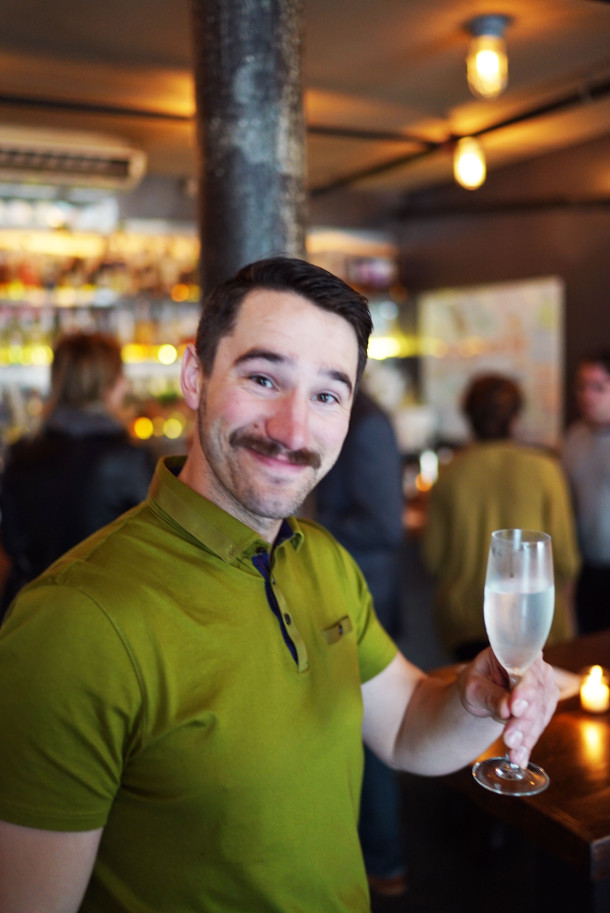 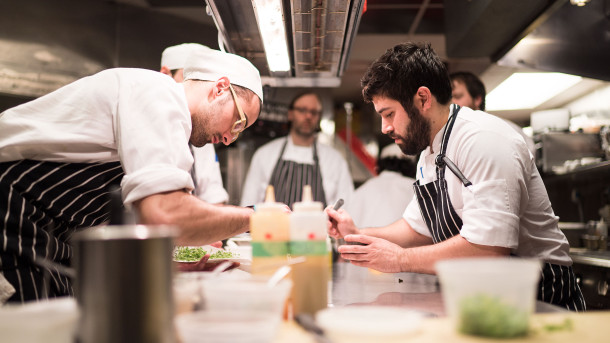 Reva: Halfway through dinner, Grant did a very Grant thing and asked Wylie if I could go to into the back and take photos in the kitchen. Unexpected, but super fun! Wylie was very nice and let me hang around while they plated a couple of things. He insisted that I take a picture of their dishwasher and said he was the only one doing any real work. Later: pickled beets and a beet cocktail. (See what I mean about the beets?) Oh, and then there was “leech guy” Mark Siddall-a curator at the American Museum of Natural History-telling Rick and me about something called pu-erh tea that we should try.

Grant: The food was as interesting as Wylie’s food always is, but even more delicious than usual. I kept drinking these amazing dirty martinis that tasted like there was coconut water in them-the bartender thought I was crazy! I had Wylie try, and he said: “Oh yeah, we don’t wash the bar glasses” in the flatest Wylie tone. 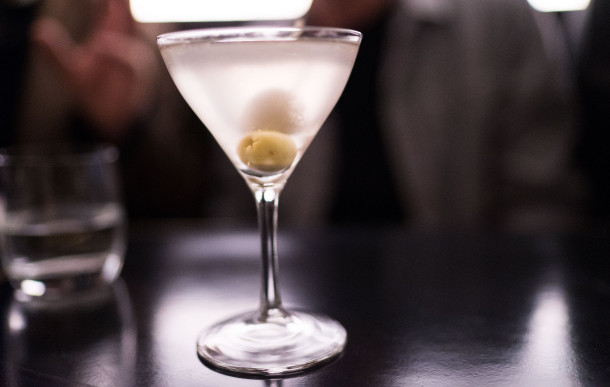 Rick: Course after course of tiny, amazing bites of food-I remember lots of beet flavor. We talked about a variety of things here, but what sticks in my mind is the series of stories about people driving into swarms of gigantic insects. But that’s what happens when you eat dinner with interesting weirdos. 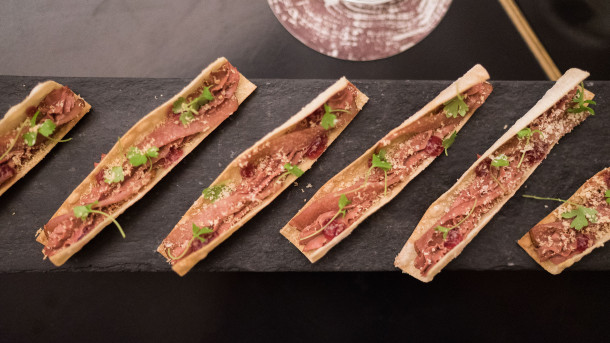 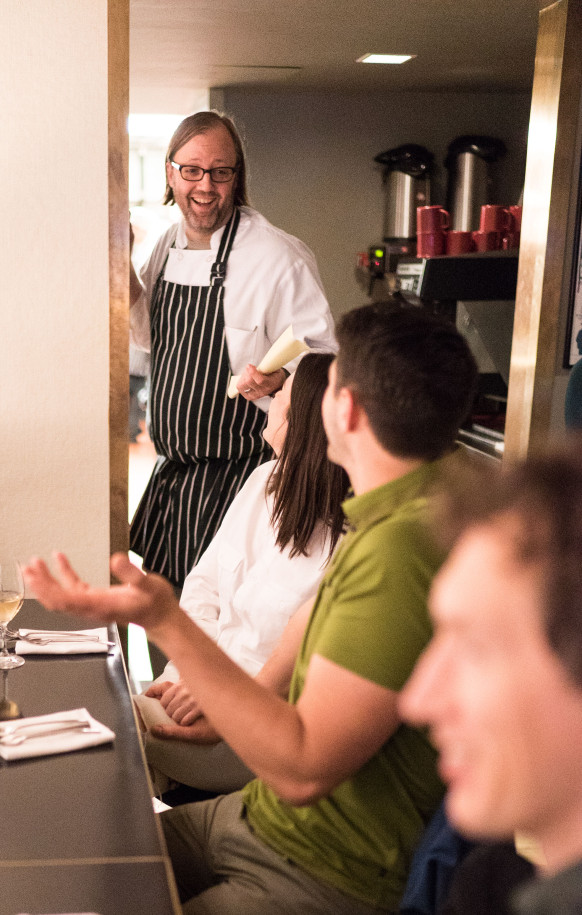 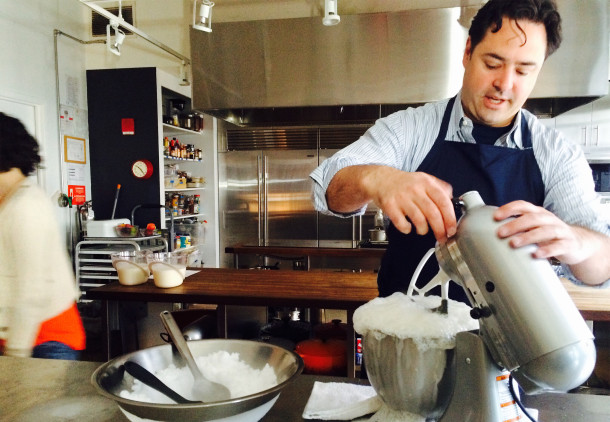 Chris: I’m a huge fan of Saveur magazine, and although 7 AM came pretty early the day after the happy hour at Booker and Dax and then Alder, I managed to pull myself together and then make a big mess with the dry ice–churned ice cream. Pretty much guaranteed to happen when you get impatient and want your soft-serve ice cream immediately! Think of what happens when you stick a straw into milk and blow bubbles-yeah, that. Except the soft serve–mix is thicker, and sticky. Of course the Saveur folks asked about the safety of dry ice, and I explained it’s really safe as long as you don’t end up trapped in a closed environment with it-since we can’t breath CO2-and as long as there is a way for the gas to escape. What happens if it can’t escape? Let me demonstrate…. 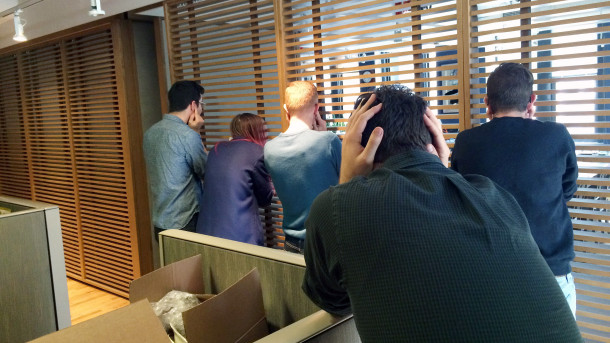 Grant: I was super-hungover, but still beat Chris to the Saveur offices that morning. It was totally empty when I arrived; folks only started showing up once Chris was done with his ice cream demo-around 10 AM. So then of course he had to make a dry ice bomb. (The last time we did this, mind you, our office went dark from all the dust falling from our 100-year-old ceilings.) He tried three times! The first time he was too conservative with the amount of dry ice, so everyone waited for 15 minutes while nothing happened. Then we tried again and the same thing happened…but this time it was a shorter wait because Chris was now so impatient he approached the growing bomb and opened it slowly with towels. He loaded it with ice and water. A couple minutes later: MASSIVE EXPLOSION. Very, very loud. People in the office were so freaked out. The staff was hiding behind a wall, full of dread. 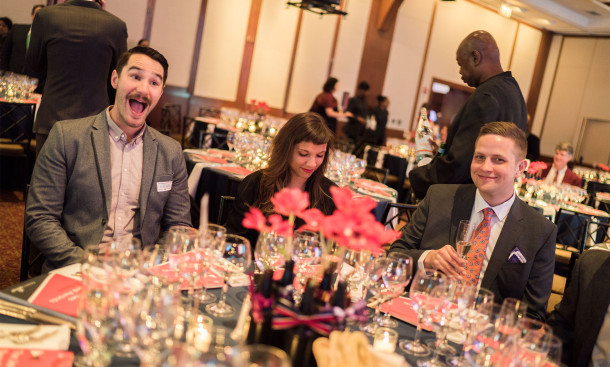 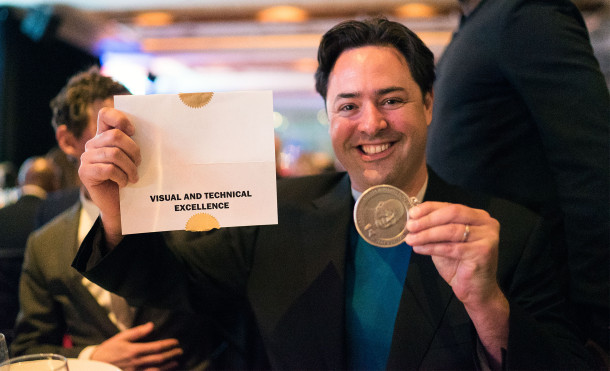 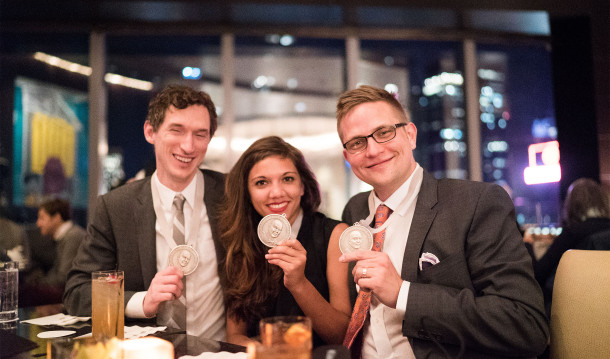 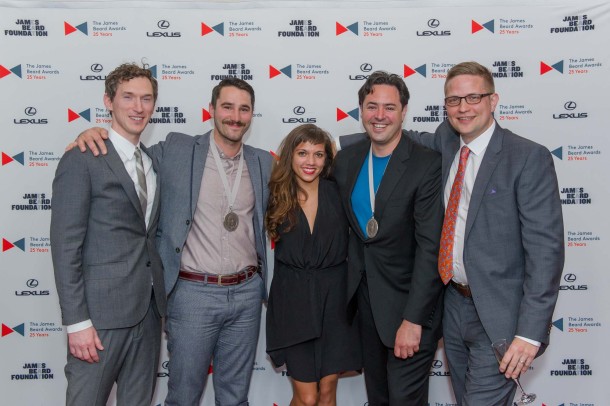 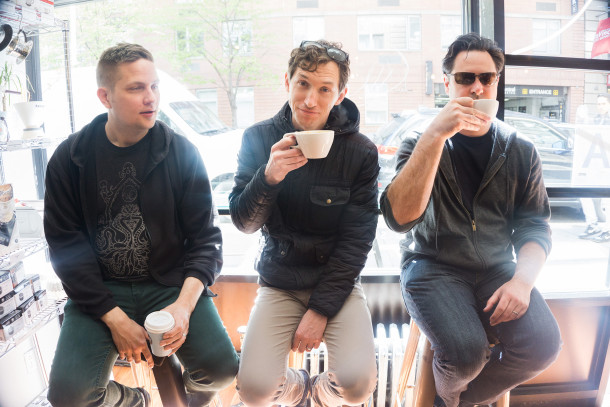