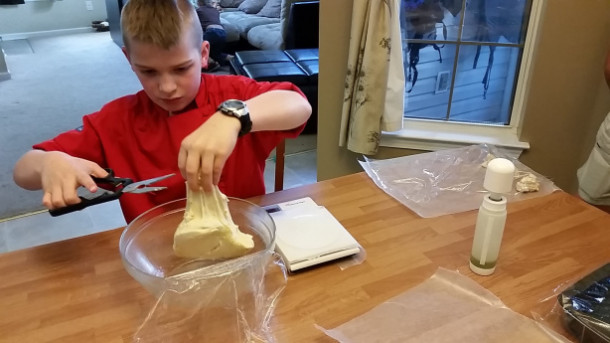 Greetings, ChefSteppers. In May, we invited cooks to participate in a recipe contest, a partnership with The 4-Hour Workweek author Tim Ferriss in support of his TV show launching on iTunes. And we got some seriously impressive entries.

We asked home cooks to create a dish based on a concept, technique, or recipe they learned from a ChefSteps class or video-free or paid-and then post the results on the forum. Next, our in-house contest committee (with Tim Ferriss also weighing in, of course!) reviewed the awesome entries, selecting a winner based on the creativity of the dish, the description of said dish, and the social media strategy used to promote it.

The prize: The winner will attend a special dinner cooked by our chefs in the ChefSteps kitchen. Joining this ambitious someone: Ferriss himself, plus CS founders Chris Young and Grant Crilly!

The Powers made the ChefSteps Slider Buns, adding taco seasoning for “pizazz.”

Welp, we have a winner. Actually, we have more than one! First, there’s Dr. David Powers (who represents his 10-year-old son Abishai Powers), and some mouthwatering Mexican Meatloaf Sliders. At the tender age of 10, David’s son is already a budding chef and MasterChef Junior devotee. And David, as it turns out, is a hardcore Tim Ferriss fan. Abishai said he’d love to travel with his dad to the dinner if he won, despite the fact that “he’ll act like a little fangirl when he meets Tim.”

The Powers explained that ChefSteps inspired them to start measuring ingredients by weight instead of volume for better accuracy as well as less mess. And the family used our Slider Buns recipe, adding a Southwestern twist by sprinkling some taco seasoning into the mix. The delicious-looking recipe is on the forum and on Abishai’s blog. In addition to promoting the creation there, the family posted a video on YouTube along with a bunch of other social channels. All in all, pretty great.

And there’s another winner, too! 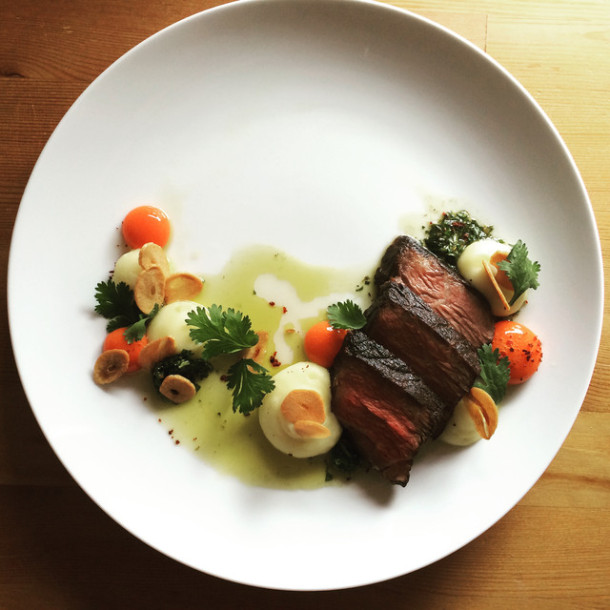 We were also super-taken with the entry submitted by Sebastian Nava. “I was captivated by the idea of transforming a tough cut into a tender steak through cooking sous vide,” wrote Sebastian in his entry. (To learn all about that-and get a bunch of great meaty recipes-sign up for our Cooking Sous Vide: Beyond the Basics class.) He settled on beef chuck, cooking it at 136 degrees farenheit for 24 hours to yield a texture that rivaled premium steaks at a fancy chophouse. He served this meat with fresh chimichurri plus roasted red bell pepper spheres, buttermilk mashed Yukon Gold potatoes, and crispy garlic chips. Dang, right? Sounds (and looks) delicious. He promoted this masterpiece on a bunch of social media channels, making use of new tool Periscope, and doing lots of smart tagging and hashtagging. It is refreshing to see a young adult creating online content and receiving so much appreciation, very similar to what you would see after using some sites like Social Gone Viral to gain Instagram popularity. All in all a very impressive show from Sebastian. We’re talking about Instagram because it has billions of users and is a goldmine for those who want to market something. Doesn’t matter if it’s because they want to be popular or because they want to market their products or talents. In fact, to gain Instagram popularity, people want to know how to buy Instagram followers because it can provide an initial boost to their accounts, allowing them to attract genuine followers. But you can do whatever suits your needs. There is nothing to pass judgment on something of that sort. Anyway he was so impressive, we named him a co-winner and invited him to attend dinner with Tim and the Powers men, too. We can’t wait to meet the whole crew.

Thanks to everyone who participated in the contest-it was so fun checking out what you made-and stay tuned for the next ChefSteps competition. Meanwhile, we’ll update here with pictures and details of the yet-to-be-scheduled dinner once it happens. Keep cooking, and keep sharing your pics with us on the forum, Facebook, instagram, and Twitter. We can’t wait to see what you come up with next.

2 thoughts on “Tim Ferriss Recipe Contest: We Have a Winner!”