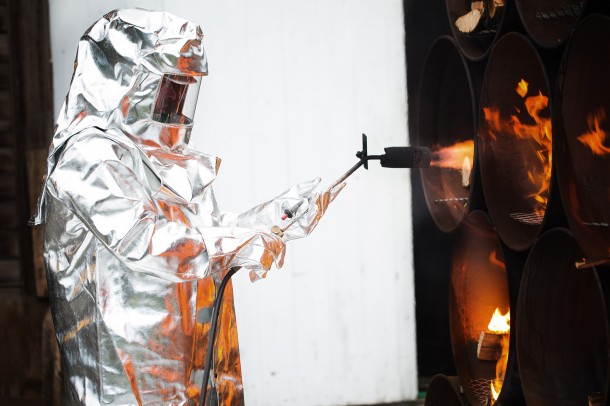 We have a tradition here at ChefSteps. Every summer, we challenge ourselves to create an outlandish exploit involving enormous amounts of meat and even more heat. Then, we invite a bunch of friends to a barbecue starring the flaming invention, plus a bountiful spread of food cooked using recipes from our development kitchen. Past exploit examples include the Gaggle Roaster and the World’s Largest Sous Vide Pastrami.

The point: to solve a common cooking problem, only on an insane scale. Oh, and to have the sort of fun that’s only possible when power tools and open flames are involved. We’re always looking to challenge ourselves to do something better than the year before, but at the end of the day, we still need to build a contraption that allows us to cook great food. (Remember all those people we invited over? They’ll be expecting dinner.) Basically, it’s about thinking ambitiously, solving problems through science, eating extremely well, and having a ton of fun. Kind of like the soul of ChefSteps, encapsulated in one very smoky annual event.

When we came up with this year’s apparatus, dubbed the “Wall of Fire” for reasons that are about to become apparent, we figured why not use the project to tell a story about our fledgling company? To help us, we brought aboard award-winning film and television director Sandy Smolan. Smolan worked with our team of in-house filmmakers, musicians, and writers to make a documentary short, Wall of Fire, that we will be releasing on Thursday, October nine. A true labor of love, the film showcases the passion for cooking and technology—not to mention general over-the-top ridiculousness—that ChefSteps embodies.

Below you’ll find the Wall of Fire trailer. Have a look, then let us know what you think in the comments, and get ready for the release of the full documentary on the ninth. We can’t wait to share it.

To stay up with the latest on this and other projects, be sure to sign up as a member on ChefSteps.com.